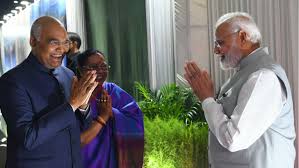 July 24: What is the truth behind the video of Prime Minister Narendra Modi and President Ram Nath Kovind greetings.

If it is- ‘To see is to believe’ then the BJP has said that the scene where President Ram Nath Kovind greets Prime Minister Modi and then looks at the camera without greeting is half-truth and a ‘cropped video’ .

We can now take a look at the viral video that is swirling on social media like a storm shared by some Indian Politicians, of course with sarcastic texts towards Prime Minister Modi and the ruling BJP government:

Provided without any comments pic.twitter.com/zOfLFupBe6

As the term of the 14th President of India, Ram Nath Kovind ended today, a ceremony in his honor was held on Saturday evening in the central hall of Parliament.

The ceremony was attended by Prime Minister Modi, Vice President Venkaih Naidu, Speaker Om Birla, Union Ministers, MPs, Party leaders and others. When President Kovind visited, everyone stood up and paid their respects to him. Then Ramnath Kovind came to greet everyone and replied. Prime Minister Modi also greeted the President and after greeting the former President, the head looked at the camera, as Ram Nath Kovind came to greet.

In response to the blunt criticism, the BJP shared footage of the President’s greeting to the scene, titled ‘here’s the full video’:

Ram Nath Kovind will address the nation today on the last day of his term as Draupadi Murmu will be sworn in as the 15th President of India on July 25.

Whether the video is faked, half-truth, or nothing but the truth, the social media trial is still happening on digital platforms so far. This is truly pathetic as many of us barely have time to pick up their ‘Generation Me’ devices and talk for a while with their distant loved ones, but are too active to pay back. comment and re-share such videos.