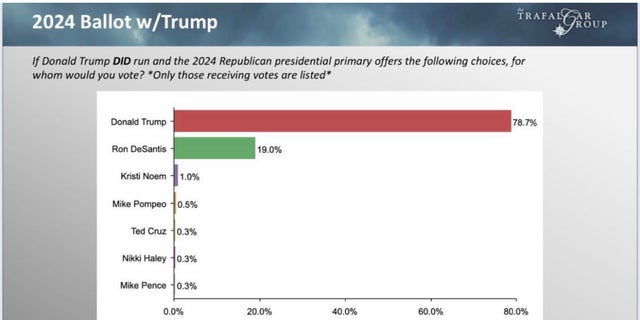 TO EXCLUDE, TO EXPEL: Tampa, Fla.– According to Fox News, former President Donald Trump dominated the 2024 GOP presidential nomination poll at the Summit for American Student Action on Sunday.

TPUSA polled conference attendees — youth activists around the country — who they would vote for in 2024 if Trump decided to launch another run for the White House.

78.7% of attendees said they would vote for Trump.

TRUMP MAKES KEY HINTS ON RUNNING MAINLY IN 2024 MAY, IN THE CULTURE WAR TPUSA SPEAKING

Trump spoke at the conference on Saturday night, hinting at a run to 2024. His speech was the keynote on the second day of the Summit on Action for Chinese Students. The turning point. Trump’s speech came on a Friday night by DeSantis, who is seen alongside Trump as one of the most potential GOP 2024 candidates.

Teasing his own possible 2024 run, Trump on Saturday said he won the 2016 election, falsely claimed he had won the 2020 election and said, “now we might have to do it again.”

“If I stayed at home, if I announced that I would not run for office, the persecution of Donald Trump would immediately stop,” Trump also said later in the speech. “But that’s what they wanted me to do. And you know what? No chance for me to do that.”

Only 4.4% of attendees said President Biden will be the hardest Republican candidate to beat in 2024.

73.8% of conference attendees said they were not confident that Republicans could communicate with younger voters, while 26.2 percent said they were.

Meanwhile, attendees were also polled on whether they thought “build the southern border wall” or “send $56 billion to Ukraine” as more important.

98% of attendees said building a wall to secure the US southern border was “more important.”

Brooke Singman is a political reporter for Fox News Digital. You can reach her at Brooke.Singman@Fox.com or @BrookeSingman on Twitter.