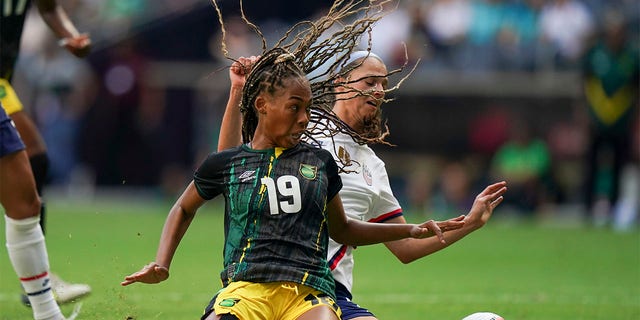 To borrow from native son Bob Marley, Jamaica is jammin’.

Jamaica has qualified for 2023 Women’s World Cup was one of the top four finishers at the CONCACAF W Championship. Reggae Girlz next faces Canada on Thursday night in the semi-finals of the tournament.

Next summer’s World Cups in Australia and New Zealand will mark Jamaica’s second appearance at football’s top tournament. They were the first Caribbean team to play in 2019.

Reggae Girlz has made a spectacular move on the international stage. The team didn’t exist just six years ago and it had to constantly struggle to find funding.

“There are so many higher levels that we can reach with even more investments from home,” said Kayla McCoy. “So we’re excited to see what’s come from us qualifying again, because not a lot of people think we can do it again. I think that’s reinforced. We got into this position and now people know we’re real and will start investing a little more.”

In 2014, Bob and Rita Marley’s eldest daughter, Cedella, made it her mission to revive the team. While Jamaica did not participate in the 2015 World Cup in CanadaThe team has attracted fans thanks to its connection to the Marley family.

Cedella Marley has been a tireless ambassador for the team, calling on much-needed sponsors. A GoFundMe was once set up to help Jamaica train and the players organized other fundraisers. But even with success, Reggae Girlz still struggled to get funding from the Jamaican federation.

Jamaica has also weathered considerable turmoil at the top in recent years. Coach Lorne Donaldson took over at the beginning of June – he only had a month with the team.

After Hue Menzies resigned over a salary dispute with the federation following the 2019 World Cup, he was replaced in 2020 by Hubert Busby Jr., who was accused of sexual misconduct while coaching a fishing team. Women’s Club in Canada. He has denied the allegations.

Busby was fired late last year and Jamaica appointed Vin Blaine, who was forced to resign after 20 national team players sent a letter to the federation saying they could not support him.

Jamaica’s goalkeeper Rebecca Spencer watches during the match between Jamaica and Haiti during the 2022 Concacaf W Championship at BBVA Stadium on July 11, 2022 in Monterrey, Mexico.
(Photo by Jaime Lopez / Jam Media / Getty Images)

“I think it was important for us as a team that we went through things together and we overcame those challenges,” McCoy said. “The women on this team have supported each other from the very beginning and from the very beginning, and I think the group that we have, and the family that we have is what has kept us through all of this. this and what has kept us kind through those obstacles.”

There was also a personal tragedy during the CONCACAF qualifiers. A promising young national team player, Jedine Carr, was killed in a shooting Friday while on his way to a club training session in Jamaica.

A moment of silence was used in Carr’s honor ahead of the final group stage games at the tournament. Khadija Shaw holds up Carr’s shirt as the team celebrates their victory over Haiti, which secured a place in the World Cup.

Shaw, known as Bunny, plays professionally for Manchester City and is Jamaica’s biggest star. At just 25, she has 38 goals in 56 appearances with Reggae Girlz.

Shaw scored a goal in the 4-0 win over Haiti. To celebrate, Cedella Marley posted on Twitter: “FIFA Women’s World Cup here we come. … I’m so proud, the whole country is so proud.”

And there’s another Marley who recently brought up the cause. Skip Marley, son of Cedella, gave permission for his song “Lions” to be used as the official W Championship anthem.

In addition to Jamaica’s game against Canada on Thursday, USA against Costa Rica in the other semi-final.

While those four teams have earned places at the World Cup, there is another prize for the winner of the tournament: a place in the 2024 Olympics. At France.

Satara Murray of Jamaica controls the ball during the Jamaica vs Haiti match during the 2022 Concacaf W Championship at BBVA Stadium on July 11, 2022 in Monterrey, Mexico.
(Photo by Jaime Lopez / Jam Media / Getty Images)

Donaldson pointed out that the Jamaican team has come a long way as judged by their company in the semi-finals. Canada won gold at the Tokyo Games and the United States was the two-time defending World Cup champion.