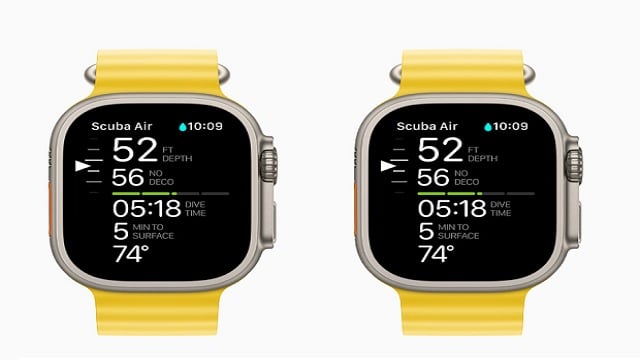 Apple’s recent wearable, the Apple watch ultra, was announced in September of this year. One of the very attractive features promised by the company is the ability to be used as a diving computer. This promise of apple may soon be fulfilled with the launch of a new Oceanic+ app for the Apple ultra watch.

This app was designed by Huish Outdoors in collaboration with Apple. Oceanic+ has been made available and accessible to users from November 29 onwards. Recreational divers can now dive with the watch on and dive up to 130 ft.

With the new Oceanic+ app, divers will be informed with relevant information while they are underwater. The app will notify divers with an alert if they descend or get to the surface too quickly, and it will also show an estimated time it will take to get back to the surface. There is a feature that takes into account the tide, temperature, visibility and current before the wearer dives. In addition to all of this, the app will use sensors that measure depth and water temperature to collect additional data.

While the basic app version is free, full access to all its features, including tissue loading and decompression tracking, comes with the paid version. As far as Indian customers of the watch are considered, decompression tracking, tissue loading and other special features can be purchased for Rs 0,969 per month or in an annual plan of Rs 7,700. Family sharing is also available at Rs 11,900 annually. This plan allows access to up to 5 users at the same time.