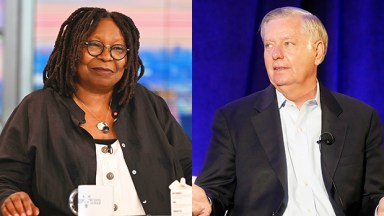 Whoopi Goldberg begins a segment with an explanation for a joke she made at the Republican Senators Lindsey Graham’s expenses in discussing abortion rights and marriage equality with the Press Secretary Karine Jean-Pierre above See on Thursday, September 22. After a short ad break, the moderator defended her comment. “It was a joke. Nothing more than that,” she explained.

The press secretary referenced Graham’s recent proposal for a nationwide ban on abortion, and she warned that such a bill would set a precedent for other issues. “It’s not just abortion. That would be marriage. It will prevent pregnancy. It will have to do with our privacy,” she said, before mentioning that the South Carolina senator made conflicting comments before proposing the bill. “Senator Graham said – maybe a month ago, early August – that he believes when to get married and when to have an abortion is up to the states to decide. So, Senator Graham, what has changed? “

Whoopi answered this question with a quip at Graham’s expense. “Perhaps he is getting married. Let’s do it quickly, because I know people are fooling our right to get married,” she said. While the co-host did not make any outspoken statements about the senator’s sexuality, some interpreted such comments. An editor for the conservative outlet and Media Research Center News Nicholas Fondacaro accused Whoopi of “engaging in bigotry of homophobia”, on Twitter. “This serves as the smear that Graham has removed,” he wrote.

When the show returned from a commercial hiatus, Whoopi explained that she wasn’t making a serious statement. “I’m doing what I do as a comic book series. Sometimes I make jokes,” she said. “I just had a whole conversation about people misunderstanding jokes. I mean, okay. I should probably never do this show again if this is what it’s going to be. It’s a joke, guys. “

This is not the first time Whoopi has called out a Republican senator by name. When he questioned the Supreme Court Judge Ketanji Brown Jackson During her confirmation hearings, Whoopi said he should be “embarrassed,” after he had voted to confirm her in the past for the DC Court of Appeals in the past.

The comedian was involved in the controversy back in February, when she was called out for making comments about The View, where she says the Holocaust is “not about race.” In the next episode, she apologizes and brings in the CEO of the Anti-Defamation League Jonathan Greenblatt to explain why such comments are harmful. However, she was suspended for two weeks from the show. Upon her return, she thanked those who helped educate her during her absence. “I have listened to everything people have to say and I am very grateful. I hope it keeps important conversations going, because we will continue to have tough conversations,” she said at the time.