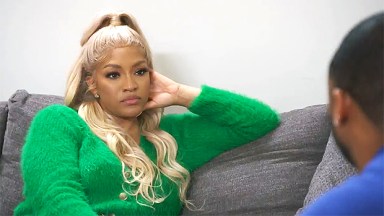 Drew Sidora have an open and honest discussion with your husband Ralph Pittman about their family in the August 7 episode of The Real Housewives of Atlanta. In HollywoodLifeEXCLUSIVE preview, Drew sits down with her spouse to talk about her 11-year-old son Josiah. Drew wants Ralph to adopt Josiah, a boy born in 2011 from a previous relationship. But Ralph has changed his mind about being Josiah’s legal parent – and that doesn’t sit well with Drew.

“Ralph told my mom and I that he would definitely adopt Josiah,” Drew told viewers during a confession scene. “And then he told me that he talked to Josiah’s biological father, and because he didn’t like it, he decided not to take Josiah. “

Ralph, who had two children (son Machai7 years old and daughter He say4) with Drew, explain for Stepped up actress how his conversation with Josiah’s father changed everything. “After talking to him, I thought about my father and the things I went through,” he said. “This acceptance is just a piece of paper.”

However, Drew was not satisfied with what her husband of eight years had to say. In a confessional, she said she was “confused” that Ralph was opposed to adopting Josiah, but was writing a book about becoming stepparents. “I just don’t know why his mind changed or why he turned around. It’s heartbreaking,” Drew admitted.

Drew and Ralph’s marital struggle played out in Season 14 of RHOA. The two clashed over Ralph’s problematic assistant during a romantic dinner on the May 8 episode. They also had to deal with Drew’s assistant. Anthony spread a rumor that Ralph is gay. The married duo made it through that drama, but it’s unclear where they stand on Josiah’s adoption. The Real Housewives of Atlanta airs Sundays at 8 p.m. ET on Bravo.