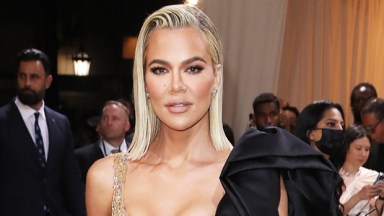 Kris Jenner had hip replacement surgery on the October 20 episode of The Kardashians and she received a visit from her daughter, Khloe kardashian, during recovery. As they discussed the procedure, Khloe admitted, “I’m actually contemplating getting my boobs fixed. It’s just something that I think about. During a confessional, she expanded on why she might want breast implants and said that seeing her sisters in bikinis was what inspired the thought. this.

“I’m wearing a rubber top with bra so they look great right now, and I wish they looked like this all the time,” explains Khloe. “I just want them to be fuller. When you see me in a bikini, I have no cleavage. My sisters have this full cleavage. I don’t know, you have to watch them without this head, but that’s for another show. “

If Khloe decides to have breast surgery, it won’t be the first time she’s had to go under the knife for a cosmetic procedure. In June 2021, Khloe first confirmed that she had had a nose job. Confession comes in Keeping up with the Kardashians when Khloe was asked about fan speculation about her “face change”.

“Everybody said, ‘Oh my gosh, she got her third face transplant.’ I had a nose job,” shared Khloe. “Everybody was so upset, like, why didn’t I talk about it? No one ever asked me. You are the first person to ever ask me in any interview about my nose. In addition to getting her nose done, Khloe also said she had “injections” in her face. It’s unclear if she’s done any other work since then. KUWTK reunion show, however.

October 20 episode of The Kardashians touched a little more about Khloe’s worries and insecurities. The episode was filmed after Tristan Thompson’s paternity and cheating scandals, and Kim Kardashian Take Khloe to Miami for a night so she can relax. Khloe admits to being hesitant about the trip because she doesn’t want to be overrun by paparazzi and fans, who she knows will take photos and videos that could lead to any narrative about her. Online. In the end, though, she was mostly able to let her guard down and have a fun night out on the town!