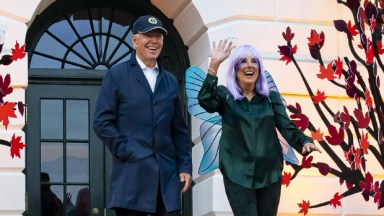 Chairperson Joe Biden79 years old and the First Lady Jill Biden71 years old, in the spirit of Halloween with their granddaughter Naomi on Monday night as they handed out candy to costumed kids outside the White House. Those tricked were the children of local firefighters, nurses, police and National Guard members and seemed thrilled to receive sweets from politicians. It rained during the visit, but that didn’t stop them all from enjoying the spooky holiday festivities.

Joe appeared to be wearing no costume for the memorable moment as Jill sported a butterfly outfit that included turquoise wings. She also wears a blonde wig with purple splashes and wears a hunter green outfit consisting of a button-down long-sleeve shirt, long pants, and high heels. Naomi was also dressed up as a butterfly with pink and blue wings, adding a pink wig and all-black outfit to her look.

The White House looks like a Halloween dream in the arrival of America’s first family. It is decorated with some pumpkins, fallen trees and cardboard structures made to look like houses with lighted windows. At one point, Joe was seen taking selfies with several visiting families as he kept warm in a dark blue jacket, black pants and cap.

Some of the outfits the kids wore included Halloween the franchise’s main killer, Michael Myers, an astronaut, a firefighter, a cowboy, a chef, and more. Joe was spotted reacting to each outfit in a different way, including feeling awestruck by the scary costumes, and he even appeared to greet the child dressed as an astronaut. . He also came Twitter To share a picture trick word or treat along with the caption, “Happy Halloween!”

Joe, Jill, and Naomi’s Halloween appearance is the first time they’ve celebrated the holiday in such a way. Since Joe was in Europe for Halloween last year, he didn’t get a chance to greet the Americans on the fun night. In addition to the first family, the dishes were represented by the Department of Education, the Department of Transportation, NASA, the United States Secret Service, the Peace Corps, the White House Fire Brigade and White House staff, among others. distributed by others.