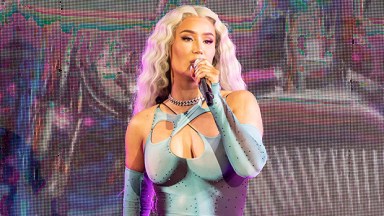 Iggy Azalea performed her hit song “Fancy” on the mid-show of the Las Vegas Raiders and Houston Texans games on October 23. The performance prompted the Raiders reporter, Tashan Reedarrive tweet, “The combination of Allegiant Stadium trying to make BBQ and Iggy Azalea perform at halftime would bore me.” The next day, Iggy started to resonate with tweets and replies on social media website with a message of her own. “If you think you are depressed now, I will give you the tears you will cry knowing my paycheck will come and sway a lil a**,” she wrote.

If you think you’re depressed now, I’ll give you the tears you’ll cry knowing my paycheck is coming and rocking an ass.

Tashan couldn’t fault Iggy when she clapped, and he answer with a GIF of a basketball player shrugging on the sidelines, seemingly giving her props in return. Iggy then rewrite to Tashan with a GIF of a sad dog with the word “sorry” written in the middle.

Fortunately, there is no real beef between the two. When an article came out about the apparent tension between the two, Iggy responded to explain what was really going on. “He joked and I joked,” she tweeted. “It’s really not serious at all so relax, your drama is on and it’s too small for you to buckle up.”

Iggy looked incredible with halftime performance, wearing a Raider bodysuit to cheer for the home team. “I had a great day in Vegas today!” she tweeted after the game. “First time I watched a football match live and they won! Thanks to the Raiders and their fans, everyone around the stage was really supportive of me and I appreciate it like you’ll never know because I was so, so nervous! “

Share
Facebook
Twitter
Pinterest
WhatsApp
Previous article
‘Bachelor In Paradise’: Logan Declares He’s Ready To Commit To Kate After Dates With Sarah & Shanae
Next article
James Corden Admits To Being ‘Ungracious’ To Waiter After Restaurant Drama: I ‘Deeply Regret’ What I Said