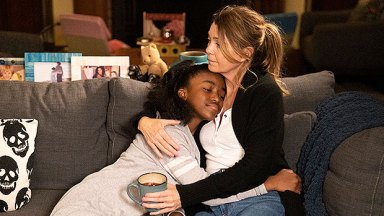 It’s Halloween at Gray Sloan. Bailey in the ghostly spirit dressed as Princess Leia. She’s excited to do Pru tricks or treats around the hospital in costume as an Ewok.

Richard wanted to celebrate Halloween the only way a real surgeon could. He decided to test the trainees’ surgical ingenuity with a pumpkin carving contest.

The trainees embrace their very own Frankenstein

Meanwhile, Nick buys dead bodies for the interns. Mika, Jules, Blue and Lucas were working on their pumpkins when they received a page from Nick. They leave their pumpkins and come face to face with a corpse.

They will deal with an injury training session run by Owen. They have to “save” the patient. Anyone who steps on the plate will be scrubbed by Winston.

Link asked Jo to do something (or really nothing) on ​​Halloween, but Jo did one more shift. Link looks a bit frustrated, but he deflects by jumping on Tinder.

Nick joins Meredith to give the kids a trick or a treat. They then put Zola back to bed, her first night out since the panic attack. Childless, Nick and Meredith spend a good time together in their hotel room.

Two teenagers were taken to hospital after jumping out of a room. Oh, and they have a high concentration of LSD. One of the teens escapes from the ER and jumps out of the ambulance. He landed right on Jo. Link is right there to help Jo, causing his Tinder date to hang at the bar. As a result, Jo may break her wrist. Teddy then asks Link what’s going on between him and Jo.

During the surgery, Simone’s phone kept going off. After the surgery is over, Maggie confronts Simone and asks what’s wrong. She was on the resident selection committee and learned that Simone had been asked to leave her first show. Simone explained everything.

After being asked to leave, she was furious. The whole situation “broken” her, and she ended up acting inappropriately. Security footage of her monstrosity was leaked and she’s been trying all day to take it down. Maggie advises Simone to put this aside and leave the past behind.

Richard goes to Joe’s Bar to talk to Taryn about going back to the hospital. Richard tells Taryn that Schmitt needs her, but she says it will take more convincing to get her back.

While resting at the hotel, Zola called Meredith and cried. She begs Meredith to come pick her up. Meredith and Nick fly into the action.

Link is ‘crazy’ about Jo

The link finally opens to Teddy about his feelings for Jo. “I was really crazy about Jo,” he admitted. The Jo-Love Link is no surprise to Teddy. Link went on to say that he “blown it away” and “missed his moment” with Jo because he was so smitten with Amelia.

Surprisingly, Teddy tells Link not to do anything about those feelings. In fact, she urges him to continue sleeping with other women until his feelings for Jo fade. When you’re in a relationship with your best friend, it just makes things more complicated.

Winston makes a big confession to Maggie. He revealed that he is leaving cardio. Winston loves Maggie and would love to be married to her, but he knows that in order for things to stay that way, he has to change majors.

Meredith sat down with Zola and asked about what had happened in her sleep. Zola admitted that she started to worry and couldn’t breathe. “Why is this happening to me?” Zola asked. Meredith promises that this will get better. They just have to find the best schools and teachers, even if they have to look beyond Seattle.