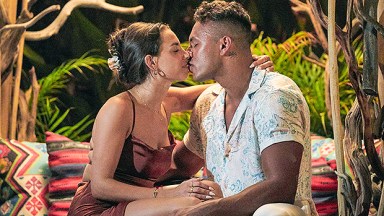 Aaron Clancy and Genevieve Parisi take their relationship to the next level in the November 1 episode of Bachelor in Paradise. However, it took them quite a while to get there. Genevieve was ready to tell Aaron she loved him, but couldn’t find the chance. She approached him about how she felt that they weren’t getting enough alone time together because he was hanging out with some guys instead. and Aaron quickly gets annoyed when he feels like he’s done something wrong when he doesn’t think he’s done it.

Genevieve remained calm and tried to explain that she just wanted ten minutes alone with Aaron to talk about something. “You can just come to me and ask me to talk,” he insisted. “Let me know. I won’t have an opinion. You won’t tell me until you’re upset.” As the conversation continued, Aaron became frustrated at how they were “going in circles.” He assured Genevieve that they were on the same “team” and that he wanted things to work between them.

As they went their separate ways, Genevieve was clearly upset. “All I wanted was to spend time with him alone,” she explained. “I’m trying to tell him I’m in love with him. I don’t need to say [him] I want 10 minutes alone. There is an engagement at the end of this. I don’t have to ask or tell anyone that. I think he’s forgetting this isn’t a brother’s holiday. I don’t think he will react the way he did. He didn’t listen or understand. “

The back and forth made Genevieve question where she stood with Aaron. “I came here, I opened up, I did everything I could,” she said. “But my gut is telling me we’re not meant for each other and there’s nothing I can do to make this relationship work.” She told Victoria Fuller that she was contemplating leaving, and although Victoria tried to talk to her, Genevieve’s mind was already decided.

Genevieve stormed up after that and grabbed her bag to leave. She was on her way out when Aaron finally chased after her. Their fight continued briefly, but in the end Aaron was defeated. “There are terrible things that have happened in my life and I know when the worst day of my life comes, I will wish I could go back to the beach with you and my friends,” he said, fighting back tears. . “Why do we have to make this a thing when it is not? It’s frustrating. I just want to relax and have fun and give you a kiss and play ball with you guys. What is happening? I don’t have to be like this. And now that is it, I pray that you have a wonderful life and I truly wish you the best but I will not threaten my happiness. “

When they both realize how unhappy they are, Genevieve finally opens up about how she’s feeling. “Yesterday, I realized that I fell in love with you and that’s why I wanted to have a chat and some alone time,” she told Aaron. “I want you to want to feel the same way and when I bring my feelings to you and you react the way you did… that’s how you’re talking to me.”

Luckily, Aaron was on the same page. “It’s a big thing and it’s scary,” he admits. “There are so many really deep emotions that I can hardly describe. You have become so close to me and the things you do can hurt me deeply because of how much you mean to me. I love you too. I don’t want you to leave. It will be better if you stay. “In the end, Genevieve decided to stay, and all is well…for now.