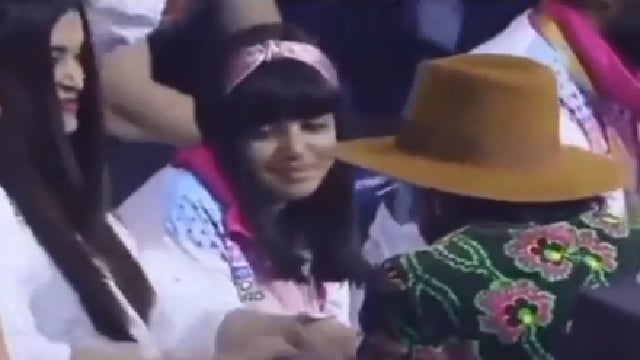 A video of Aishwarya Rai Bachchan in conversation with Bollywood live star Ranveer Singh at the Pro Kabaddi League (PKL) final has taken over the Internet for all the right reasons. Ranveer joined Abhishek Bachchan, Aishwarya and their daughter Aaradhya Bachchan at the PKL final in India before he flew to Qatar for the FIFA World Cup final. The kabaddi championship is held in Mumbai.

A clip showing Aishwarya, Aaradhya and Ranveer passionately joking around is being released. The video shows Ranveer and Aishwarya chatting. Wearing a black floral jacket and hat, Ranveer’s back is visible towards the camera. The ‘Devdas’ actress is seen in a Pink Panthers white shirt. She cutely pinched his nose while talking to him. In return, Ranveer Singh kissed Aishwarya Rai’s hand.

The playful moment had the cutest expression on the face of Aish’s daughter, Aaradhya. A short clip of Ranveer Singh kissing Aishwarya Rai’s hand was shared on Twitter on December 18. Watch the video here:

(With input from IANS)