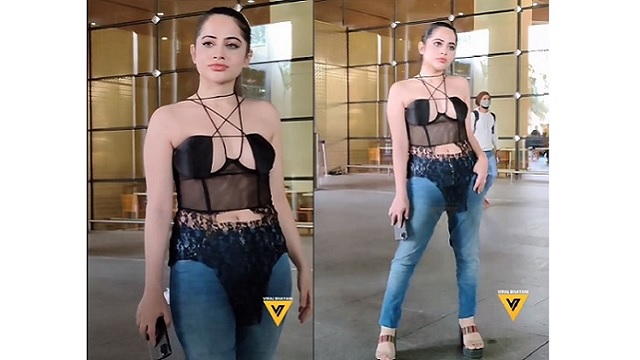 On Friday, Urfi’s lawyer, Nitin Satpute, said: “I have filed a complaint against BJP leader Chitra Wagh for Intimidation.

TV actress Urfi Javed, who has spoken out about BJP leader Chitra Wagh being complained by police for dressing offensively on the streets of Mumbai, has filed a lawsuit against her.

According to the Times of India, Urfi’s lawyer Nitin Satpute said on Friday: “I have filed a complaint about IPC offense U/s 153(A)(B), 504, 506, 506(ii) against BJP Smt party employee Chitra Kishor Wagh for Threats and Criminal Threats to harm Urfi Javed Model/Actor in the public domain and requested Preventive Action U/s 149 and 107 of the Penal Code, (Chapter Proceeding against her because she repeatedly violated the peace in society by making threats in the media).”

“Today I filed a complaint with the Commission for Women. I will be meeting with Smt Rupali Chakankar, Chair of the Women’s Commission to file a complaint about taking further action,” He added.

Urfi Javed previously wrote in an Instagram story about Chitra Kishor Wagh and targeted her on social media, “I know it’s pretty dangerous to upload stuff against politicians but anyway these people are also making me want to commit suicide so either I kill myself or speak my mind and get killed by them. But again I don’t start this, I have never done anything wrong to anyone. They are coming to me for no reason.

Cuttputlli is the most watched film in 2022 by Pooja Entertainment