Suriya to play double role in his next, Film to mark Disha Patani’s Tamil debut 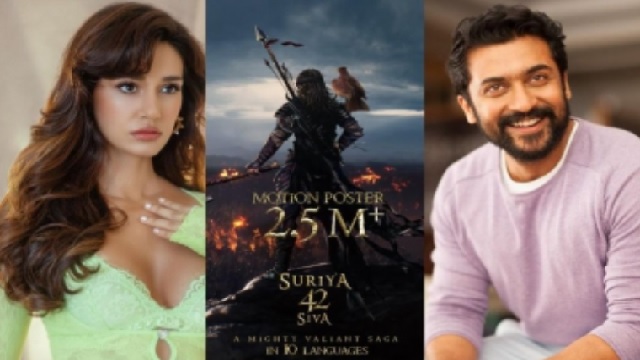 Suriya to play double role in his next, Film to mark Disha Patani’s Tamil debut

The film stars Disha Patani in the lead role. The first filming schedule has been completed in Goa and the crew has begun filming in Chennai.

The first filming schedule has been completed in Goa and the crew has begun filming in Chennai. They will then move through Tamil Nadu. Shooting is happening at a fast pace and the film is likely to be released in 3D as well. Industry sources told IANS that Suriya is playing a dual role — the two characters he plays live in the present and the past, respectively. In a statement, Disha Pattani, who is about to debut in the Tamil film industry, said: “I am delighted to announce my sequel with Suriya Sir and Siva sir. It feels great to be a part of such a big project that has all the bigger elements in real life for audiences to experience on the big screen.”

She added that the character she’s playing is “quite unique” and that she’s excited to bring “my never-before-seen avatar to audiences”. The star cast includes Yogi Babu, Kovai Sarala, Kingsley and Anand Raj. Vetri is on camera and the music is by Devi Sri Prasad. Along with marking Disha Patani’s Tamil debut, the film is garnering a lot of anticipation as it is a big budget film and a prestigious project for both Suriya and Siruthai Siva. According to industry sources, this is an action-packed drama with a twist of romance.