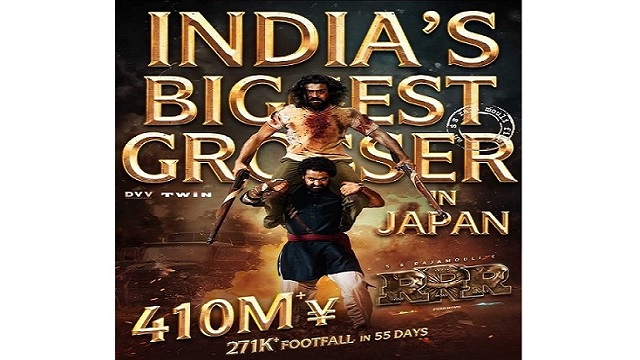 After burning through the domestic box office, Rajamouli’s all-India epic ‘RRR’ has emerged as the highest-grossing Indian film in Japan.

Hyderabad: After burning through the domestic box office, Rajamouli’s all-India epic ‘RRR’ has emerged as the highest-grossing Indian film in Japan. In the process, ‘RRR’ defeated Rajinikanth starring ‘Muthu’ after 24 years of separation.

Released this November in Japan, ‘RRR’ starring Ram Charan and NTR, has grossed over 403 million yen or around Rs 24 million at the Japanese box office, surpassing ‘Muthu’ in the process this.

The crew recently visited Japan to promote the film before hitting theaters there.

The film has grossed over Rs 1,200 crore worldwide since its release in March this year.

Rajamouli’s multi-star epic ‘RRR’ is literally dominating the world if the flood of recognition that is coming to it is any indication. Among others, the film previously won the New York Film Critics Circle Award. More recently, ‘RRR’ has earned nominations for two Golden Globe Awards. Producers are also aiming for the Oscars.